John Fuller’s 100th donation will be a day that he and his wife Jacqueline will never forget. 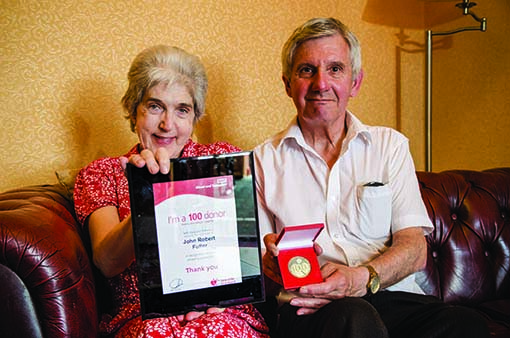 John, a regular blood donor, donated every three or four months. In April he was about to give his 100th donation. His wife, Jacqueline, had a heart condition that had been worsening and she had recently been placed on the transplant waiting list. John takes up the story.

“My wife Jacqueline had been suffering with a heart condition for many years and her condition had slowly worsened. When I booked my appointment for my 100th donation I had no idea the date I had booked would be anything other than an ordinary day.“

On that day, at 4am in the morning, the telephone rang. My first reaction was one of displeasure until I answered the phone and the voice on the other end said to me ‘This is the hospital, there is a possible heart for Jacqueline.’ She had been on the transplant list for just two months.

“Those words started a day which changed our lives for ever. By the end of the morning Jacqueline was in the operating theatre, and for the first time I had time to think.

One of my thoughts was of my blood donation. It was booked for that evening, the time when she would be coming out of theatre. At first I thought ‘I’ll just have to miss it this time.’

Then I thought, ‘No! Someone has lost their life and by donating their heart they have given my wife the chance of a future. The least I can do is donate some blood.’

So I drove home and went to the donor session. ‘Could I donate now rather than later?’ I asked. ‘Yes of course’ came the reply.“I hope you can understand that my 100th donation does have importance to me, not because of the donation itself, but because of the day it was made on, and the importance of blood without which the heart transplant could not have been carried out.”

Jacqueline is now recovering well thanks to the generosity of an organ donor and blood donors.