Universal blood components – the way of the future?

Matching blood groups is vital for safe transfusions, but scientists are looking at creating blood that’s suitable for everyone.

We all have a blood group. There are many different types and the best known are the ABO and Rh groups.

When a patient receives blood from a donor, it has to be compatible. If a patient were to receive a transfusion that is not compatible with their blood group it can cause a dangerous transfusion reaction.

Researchers are looking to develop universal blood components that could be transfused to patients irrespective of their blood group. These components would help to improve the safety of transfusion by reducing the risk of a reaction, speeding up transfusions in emergency situations where the patients’ blood group may be unknown, and simplifying the blood supply chain and decision making in transfusion.

When you give blood, your donation is split into three main blood components - red blood cells, plasma, and platelets. Patients receive the relevant blood component according to their clinical need, so one donation can help several patients. These three main components have different characteristics. 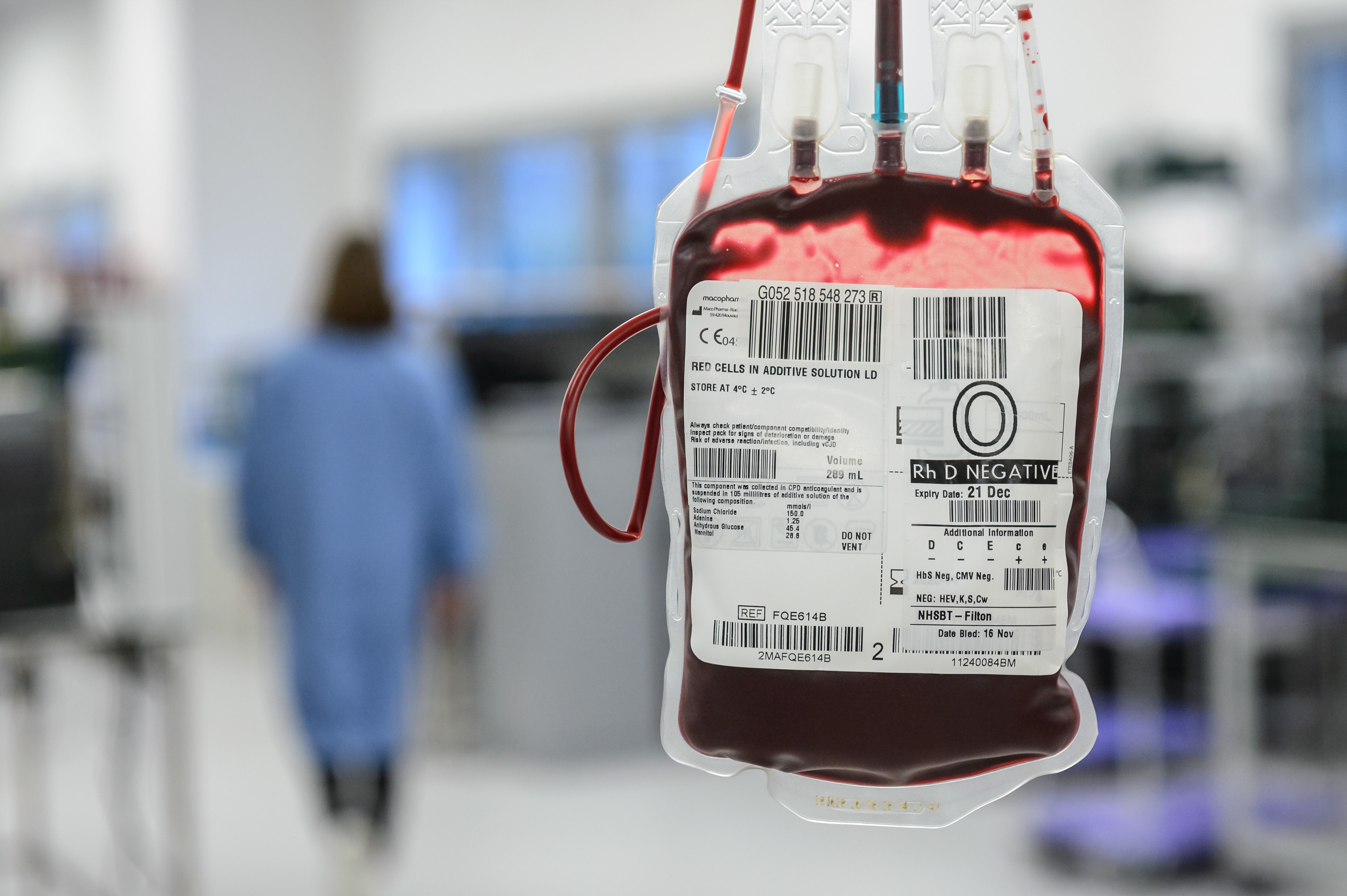 Red blood cells make up about half of circulating blood volume and are transfused to patients who have experienced a huge blood loss or are anaemic. The so-called universal blood group for red blood cells is group O negative. This type has no antigens on the surface of the red blood cells, which means it can’t trigger a reaction from antibodies in a patient’s blood. While 47 per cent of the population are group O, only seven percent of the population are O negative. This blood is in high demand as it’s often used in emergency situations when a patient’s blood group is unknown.

Researchers are looking at using gene editing to produce red blood cells that are more universal. Genes for the blood groups are cut out using molecular scissors. This process can be combined with methods under development for growing red cells in the laboratory from stem cells, to create red cells of the desired blood group. Currently this is both costly and time consuming and is likely to be reserved for individuals with unique blood requirements.

Blood plasma makes up the other half of blood volume and carries the red and white blood cells, platelets and materials such as proteins responsible for blood clotting around the body. It is transfused in situations of severe bleeding such as trauma, surgery and childbirth. Plasma also contains circulating blood group antibodies. Usually patients will receive plasma of their blood group type. However, in a trauma situation where the blood group is not yet known, patients are transfused with blood group AB plasma as this does not contain any circulating anti A or anti B antibodies. Plasma group AB is therefore considered universal (as opposed to O negative for red cells). As only about four per cent of the population are blood group AB, supplies are limited. We do not consider the Rh group for plasma when it is transfused, as the Rh antigen is only present on cells and plasma is virtually cell free.

NHS Blood and Transplant is collaborating with commercial partners to provide a universal plasma system where antibodies in blood groups O, A and B could be removed to provide a universal plasma suitable for transfusions to all, regardless of their blood group. This is a long-term project and is being funded by the National Institute for Health Research.

Another target is to develop dried universal plasma. Currently plasma is stored frozen and then thawed when it is needed. A dried plasma product could be reconstituted quickly, making it easily available when treating patients outside of the hospital environment in an emergency. 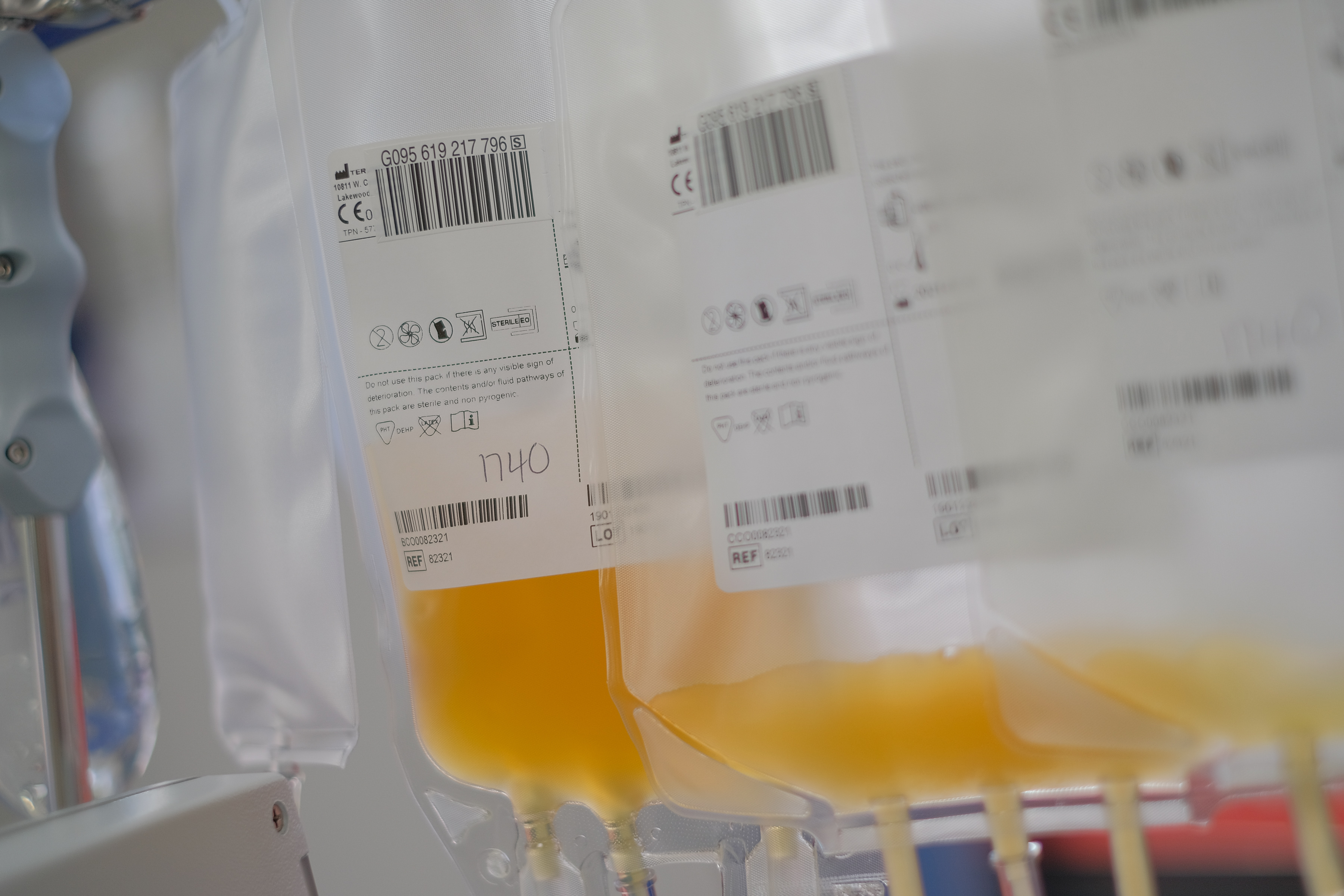 Platelets constitute about one per cent of blood and contain clotting agents to help prevent or treat bleeding. Many platelet donations are used to treat cancer patients. Like red cells, platelets also have ABO molecules on their surface, but because we suspend platelets in plasma when we produce them for transfusion, they also contain blood group antibodies. There is no truly universal platelet type, but blood group A negative is considered the most ‘universal’ platelet as this is less likely to cause issues for patients if transfused to patients with other blood groups. Because we can currently only store platelets for 7 days prior to transfusion, ensuring hospitals have enough platelets of the right blood group is a continual challenge. Having universal platelets would greatly simplify supply to hospitals and reduce the risk of a patient having a reaction if they are transfused platelets of a different blood group. We are exploring methods that might enable platelets to be more blood group universal.

The work to develop cost-effective methods to produce universal blood components is a long-term objective and will not be realised quickly. However, in the future they could bring real benefits to patients, hospitals, and the blood supply chain. But until then we are still dependent on all of our volunteer blood, platelet and plasma donors to ensure patients get the transfusions they need.