Blood clotting, also called coagulation, is an important process that reduces bleeding when we are injured. It happens whenever a blood vessel is damaged, whether the injury is a scratch on the skin or something more serious. 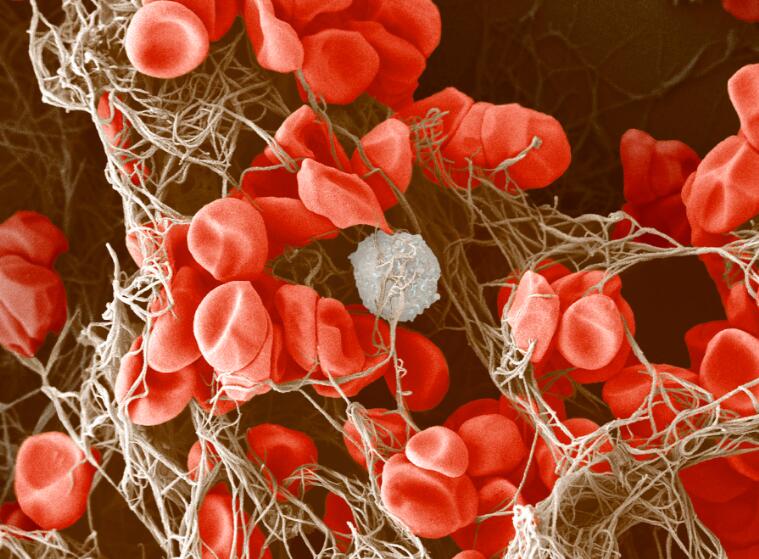 Blood vessels are like pipes taking blood where it needs to go. When a blood vessel is damaged blood can flow out. The body needs to stop the leak and repair the pipe (blood vessel).

(Picture: Blood clot in a vessel)

Injury triggers a reaction in the blood vessel, and activates platelets (specialised blood cell fragments) and clotting factors (specific proteins) in the blood, which work together to slow and stop the bleeding. A clot is formed over the damaged area, which the body will naturally dissolve when the injury has healed.

Meanwhile, in the blood, the platelets start the repair process by plugging the leak. When a blood vessel is torn, collagen just under the lining becomes exposed. Platelets are attracted to collagen and move to the site of the injury. The cells lining the blood vessel release von Willebrand factor into the blood which attaches to the platelets. It acts like glue, helping the platelets stick together and stick to the collagen. The platelets change shape, from smooth discs to spiny spheres. These activated platelets secrete chemicals into the blood to signal other platelets to the area to help the process. So, the platelets clump together and stick to the inside wall of the damaged blood vessel, forming a plug that patches and closes the wound temporarily. This process only takes a few seconds.

The platelet plug can’t last very long by itself, so a stronger clot is needed to completely stop the bleeding. Clotting factors in the blood work together to convert fibrinogen, a protein in the blood, into fibrin. The fibrin threads weave and stick together over the top of the platelet plug and hold the clump in place. This clot, which is formed within just a few minutes, creates a strong seal inside the wound and prevents blood from leaking out.

The fibrin then acts as scaffolding for new tissues to grow onto during the healing process. After the injury is healed, the fibrin clot is dissolved and removed from the body.

Platelets are small, about one third of the size of a normal red blood cell.

Platelets exist in the circulation for 7-10 days.

Platelets are made in the bone marrow and broken down in the spleen.

Platelets can only be stored for 7 days after they’ve been donated.

Have you read about the other functions of blood?

Transport around the body

Did you know the body has 60,000 miles of blood vessels? This is long enough to circle the globe more than twice.

It's role in the immune system

Did you know when fighting an infection, the body produces more red blood cells?