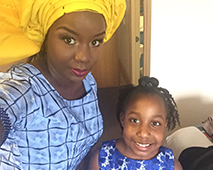 Shalona needed her first blood transfusion in July 2009. She was 38 weeks pregnant and was hospitalised with a sickle cell crisis. This caused a chest infection which then turned into pneumonia. In addition to this, she also had a condition called HELLP syndrome, which occurs in 10-20 per cent of pregnant women with Preeclampsia and Eclampsia. Her red blood count was at its lowest and something needed to be done as soon as possible. Her body was on the verge of giving up.

Within hours an IV was placed into a central vein in my neck, and she had a blood transfusion. A day later she was taken into surgery to have a C-section. Her daughter Harmony was born at a healthy 6lb 14oz and she was on the road to recovery. She’s been able to enjoy motherhood ever since.

Shalona had a second Sickle Cell Crisis in June 2013 and was again admitted to hospital. The doctors explained that her red blood count was really low and that if it didn’t improve within 24 hours she need a blood transfusion. Unfortunately her blood count plummeted even further. Luckily the blood she needed was available. She was given a blood transfusion and the next day she was well enough to be discharged from hospital and able to carry on with my life.

Shalona would like to say a huge “Thank You” to all those who have donated blood, as without having blood available when I needed it, I may not have survived something as natural as childbirth. Being able to raise my daughter and see her grow is priceless.

Shalona is fortunate enough to only have needed two transfusions so far, however there are many more people out there within the black community with blood conditions like sickle cell who require regular transfusions just so they can live a normal life.