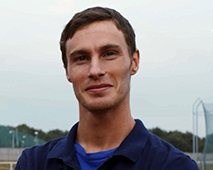 Paul needed blood as a newborn baby or he wouldn’t have survived. He had a number of transfusions soon after birth.

He is a twin and a condition called twin to twin transfusion syndrome meant his brother, Alex, took nearly all his blood in the womb, leaving Paul seriously ill.

He received his first transfusion at a few hours old. Paul needed several more as part of his treatment.

He was also diagnosed with cerebral palsy.

After a month in hospital Paul was allowed home.

Paul discovered a love of running and is now competing over 400m and 800m in Rio for ParalympicsGB.

He says“Blood saved my life, I can’t thank donors enough.

“It’s incredible what they do, they do an amazing job.

“I think everyone who can should be a hero and give blood. It’s a positive thing to do, it’s an absolute no brainer.

“Blood donors help people when they need it most.”