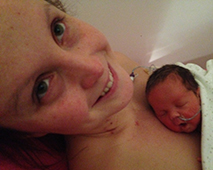 Natasha has been told she holds the record for the most blood transfused, in any single surgical procedure, at the hospital which saved her life on Christmas Day 2015.

The mum of three needed 39 units of blood products during around seven hours of surgery following a complicated emergency c-section which finished at Worcester Royal on Christmas Day 2015.

Natasha lost around 18 litres of blood. At one stage doctors also used a Cell Saver blood machine to collect the blood she was losing and recycle that back into her too, meaning the total loss was even higher.

She received 29 units of red blood cells, and 10 more units other blood products, including platelets, plasma, and cryoprecipitate. It was reported that after this there was no more blood products available to her blood group O negative.

During pregnancy Natasha had been diagnosed with Grade 4 Placenta Previa. This meant her placenta was covering her entire Cervix and blocking a natural birth so that she needed a caesarean section. She was on ward due to an earlier bleed, so when a heavy bleed came in the late evening on Christmas Eve doctors instructed an emergency caesarean section. Natasha was 32+1 weeks pregnant.

However during the operation doctors discovered she also had Placenta Percreta, which is where the placenta grows through the uterine wall and attaches itself to other internal organs, in this case her bladder and uterus was severely compromised.

“The doctors couldn’t remove the placenta. My leading consultant phoned a colleague who is bladder surgeon, he was not on call, but just happened to be home, in bed. He came into the hospital immediately despite being 40 minutes away while my leading consultant held my uterus in his hands to help stem the bleeding. The consultant urologist had done this kind operation once before. He reconstructed my bladder using tissues from my tummy while dissecting the placenta. My leading consultant then had to perform a hysterectomy as well as the uterus was totally destroyed and I was critical. They had to give me every available blood product there is.”