At only four years of age, Edie has already received 60 units of blood. 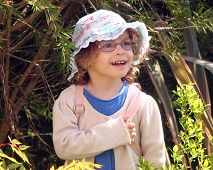 At only four years of age, Edie has already received 60 units of blood.

Edie received her first unit of blood at only a few hours old, having become critically ill shortly after birth. She was born with a dangerously low iron count – less than half of what it should have been – which caused a range of complications; her heart and lungs were particularly struggling. At two days old she was transferred to receive specialist care in a neonatal intensive care unit.

Two weeks later, Edie was transferred back to her previous hospital and discharged. However, it soon became apparent that severe anaemia had returned and more blood transfusions were needed. Further investigations continued over the next few weeks and months. A week before her first birthday, she was diagnosed with Diamond-Blackfan anaemia: a rare bone marrow failure disorder where patients cannot produce red blood cells properly. This lifelong condition is so rare it only affects around 130 people in the UK.

Mum Clara said "In the first few months we hoped Edie’s bone marrow would sort itself out. To discover our baby had such a rare condition was hard to believe; realising she would need regular blood transfusions for the rest of her life was a huge shock."

Edie now receives monthly blood transfusions in order to treat her condition. These are timed carefully to prevent Edie becoming unwell, however just before she is due a transfusion Edie can become emotional as well as tired and is more prone to illness.

Blood transfusions are a lifeline to Edie, as Mum Clara describes: "Once Edie has received her blood the difference in her is unbelievable. She has so much energy she is almost bouncing out of the hospital. Sometimes we don’t know if she will be able to sleep as she is so energetic!"

Since Edie’s diagnosis many of her family and her parents’ friends have gone on to become blood donors. Mum Clara says "Edie tells people that when she was a baby some of her blood was missing so she has to go to the hospital to get it. She has used words like 'transfusion' and 'cannula' since the age of two. Many people wouldn’t know Edie is unwell, and her positive attitude towards her illness and zest for life continues to inspire people.”

Receiving monthly transfusions means that Edie can go to pre-school. She can enjoy ballet lessons, singing her favourite songs and having adventures with her big brother, whom she adores. Clara said "I don’t want to think what might happen to Edie if people weren’t prepared to give blood. We only get to keep our girl because of strangers who are willing to give up an hour to donate now and then. There are no words for the gratitude we feel."