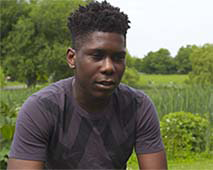 “In total Daniel has had over 5 major strokes, many mini strokes and lots of other complications that childhood stroke brings”

“Daniel had his first stroke at 6 years old and I can tell you it was the worst day of my life, I really hate to recount that morning, it was a terrible day. His whole side was paralysed”

After Daniel’s first major stroke he was in hospital for a month as had to learn how to walk again. In 2007, he suffered another massive stroke, causing bleeding on his brain which lead to him falling in to a coma.

“It started as headaches that would not be relieved by painkillers so I rushed him to hospital. He was immediately admitted and he fell into a coma for 3 days.”

Daniel recovered from his stroke and is now attending university where he studies sports science. He requires continuous blood transfusions to stay well. Mum Carol explains,

"He's just so different and so courageous. When I'm low, he says, 'Come on, Mummy, snap out of it!' It should really be the other way round."

“Daniel has required so many transfusions, like so many Sickle Cell patients. However currently on 1% of blood donors are from black African or black Caribbean backgrounds. Black people have a rarer blood groups. It means that a lots of young people like Daniel can suffer from terrible post transfusion reactions because we don’t have enough blood from similar ethnic backgrounds. So why do we rely on other people to donate blood for our kids living with Sickle Cell? If you’re of Afro/Caribbean or Asian background, please donate blood. Because someone living with Sickle Cell needs the lifeline you can offer. Blood transfusions can help stop a child from having further strokes and so many rely on blood transfusion or exchanges every month.

Please share and do something amazing to help a child/young person who needs blood to have an amazing life too.”