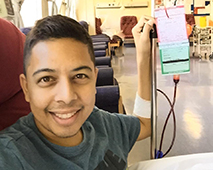 He needs blood transfusions every three weeks at Ealing Hospital and the constant transfusions led to a build up of iron in his blood.

The iron overload began to damage his heart and Amit spent three months in hospital in the Cardiology unit in 2007 and another four months in 2008 after a relapse.

"It was dreadful, I was really quite poorly, in a short space of time I went to needing critical care which essentially saved my life," said Amit, product trainer for Samsung, who also owns his own photography business. "I couldn't walk, and couldn't talk very much, but I think the worst part was the 25 tablets or so a day."

Amit recovered and now leads a busy, normal life, and spends lots of time with friends. But he still needs the transfusions every three weeks, and each one takes around six hours.

"I look up on it as my 'spa day'," said Amit. "It's a chance to zone out and rest, to read and watch the iPlayer. I catch up with the staff and the other patients on how they are doing. I look forward to it, it's the best day of the month!"

Five times a week Amit also has a 12-hour long injection pump treatment with a drug to stop the iron levels building up.

Amit leads a regular life but by the time his transfusions are due he feels tired and weak - just walking up the stairs can leave him out of breath.

"Without blood transfusions, it would be game over for me," said Amit, who is from a Indian and Hindu background. "I've never taken the blood I receive for granted. I never turned up and there's been no blood for me but there's always a concern."

Amit has done awareness raising work with the UK Thalassaemia Society, including taking photos and manning information stands at events including Melas.

Amit said: “I’d like to add my thanks to the Haematology team at Ealing Hospital led by my nurse Nerinder Kaur who runs the unit with so much care and affection. The team at Ealing have supported me and my family for almost 30 years and are some of the most hard working people in the healthcare sector.”