O negative blood is often called ‘universal’ because people of any blood type can receive it. Mum, Lucy, required a life-saving blood transfusion after complications during an emergency c-section. 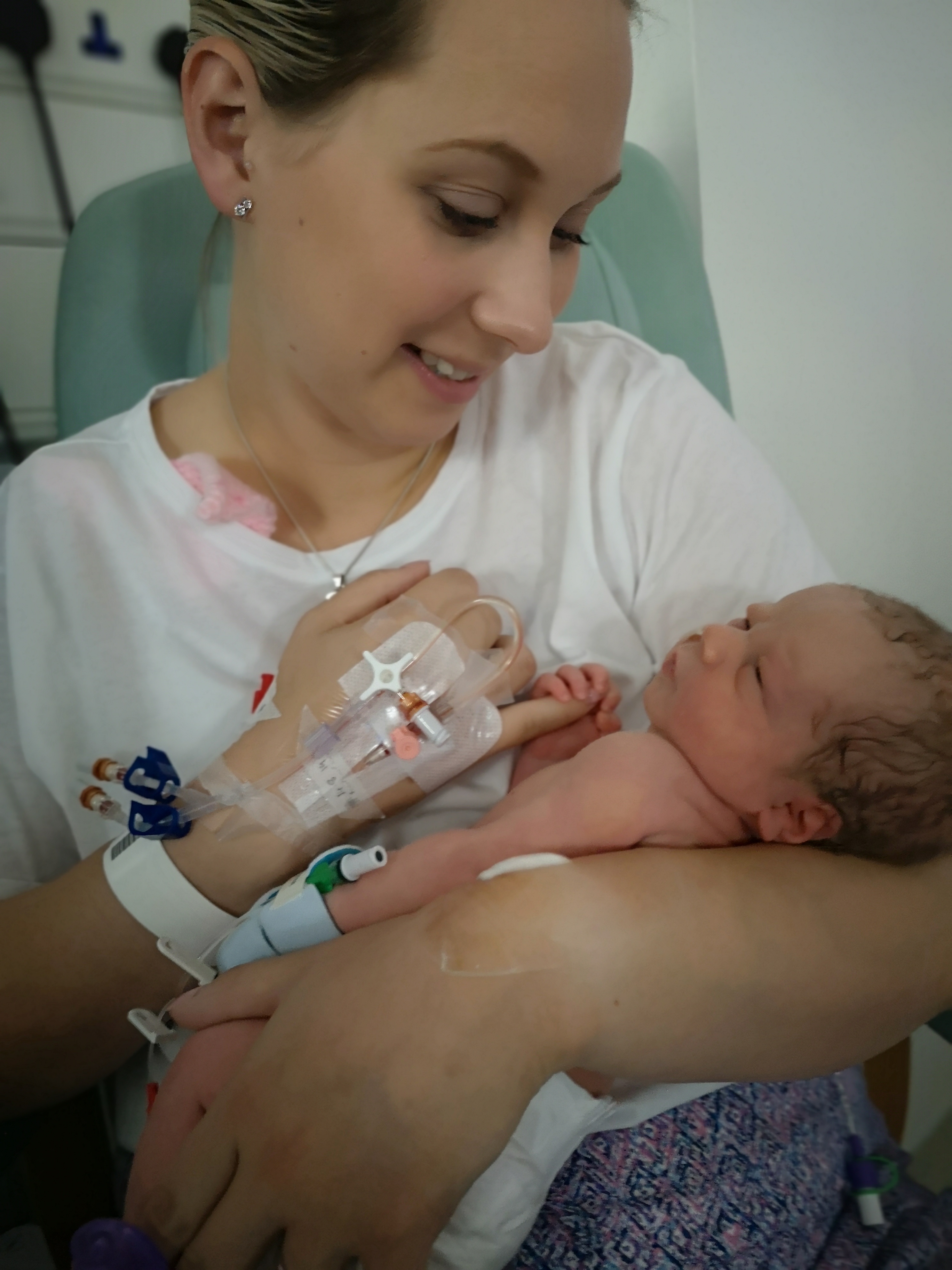 Lucy was 36 weeks pregnant when she was rushed to The Rosie Hospital in Cambridge after her low-lying placenta caused heavy bleeding.

She need an emergency c-section, but surgeons had no choice but to cut into the placenta, causing massive haemorrhaging. As a result, Lucy needed six units of blood.

Husband of ten years, and a regular donor himself, Sam Tanner was with Lucy in theatre. He says, "I remember the doctors activating the 'major haemorrhage protocol' and my heart just sank.

"It wasn’t until after Lucy was safe that it all sank in - if people hadn’t given up their time to donate that blood then it wouldn’t have been there when we desperately needed it."

I’m so grateful to the donors who give up their time to donate blood. If they hadn’t donated, I wouldn’t be here.

Lucy echoes Sam, “I’m so grateful to the donors who give up their time to donate blood. If they hadn’t donated, I wouldn’t be here. Thank you for being the reason that my children still have their mum.”

Baby Tallulah was born safely on 15th August 2019 - a happy and healthy addition to Lucy and Sam’s now family of five.

Sam says he became a blood donor after a few years of good intentions. "Although Tallulah’s birth was the most worrying in terms of how much blood Lucy lost, she also lost a fair bit during the birth of our eldest son, Spencer, back in 2013. I always thought about donating after that, but as usual life always got in the way and there was a reason I couldn't," said Sam.

"Then in about June 2018, we went for a walk round the village, by then with our two boys, Fletcher and Spencer, and there was a mobile donation session running in the local primary school.

"And it dawned on me then that potentially the only reason the four of us were there together was down to donors, so I went in. Unfortunately, there was no space on the day, but my mind was made up then, so I went to the Cambridge Donor Centre a few days later.

You are a First Responder

O negative blood is often called the ‘universal blood type’ because everyone can receive O negative red blood cells. This is why it is important in emergencies and when a patient’s blood type is unknown.

Air ambulances and emergency response vehicles carry O negative supplies for emergencies. As an O negative donor you are the lifeblood of the emergency services. You are a First Responder.

And in the grand scheme of things, your split-second of discomfort in your otherwise normal day could mean the difference between life and death for someone else on what could be the hardest day of their lives.

"I'll admit I was a bit nervous the first time, but mainly through not knowing what to expect. I needn't have worried though, as the staff were amazing and took as long as needed to explain everything in detail to put my mind at rest. From arrival to being done and out the door took no more than an hour. The actual procedure was completely painless in my opinion.

"Yes, it's a tad uncomfortable having your finger pricked, and for the split second the needle goes in your arm, but if you've ever stubbed your toe or stood on an upturned plug and survived to tell the tale, you'll be absolutely fine. 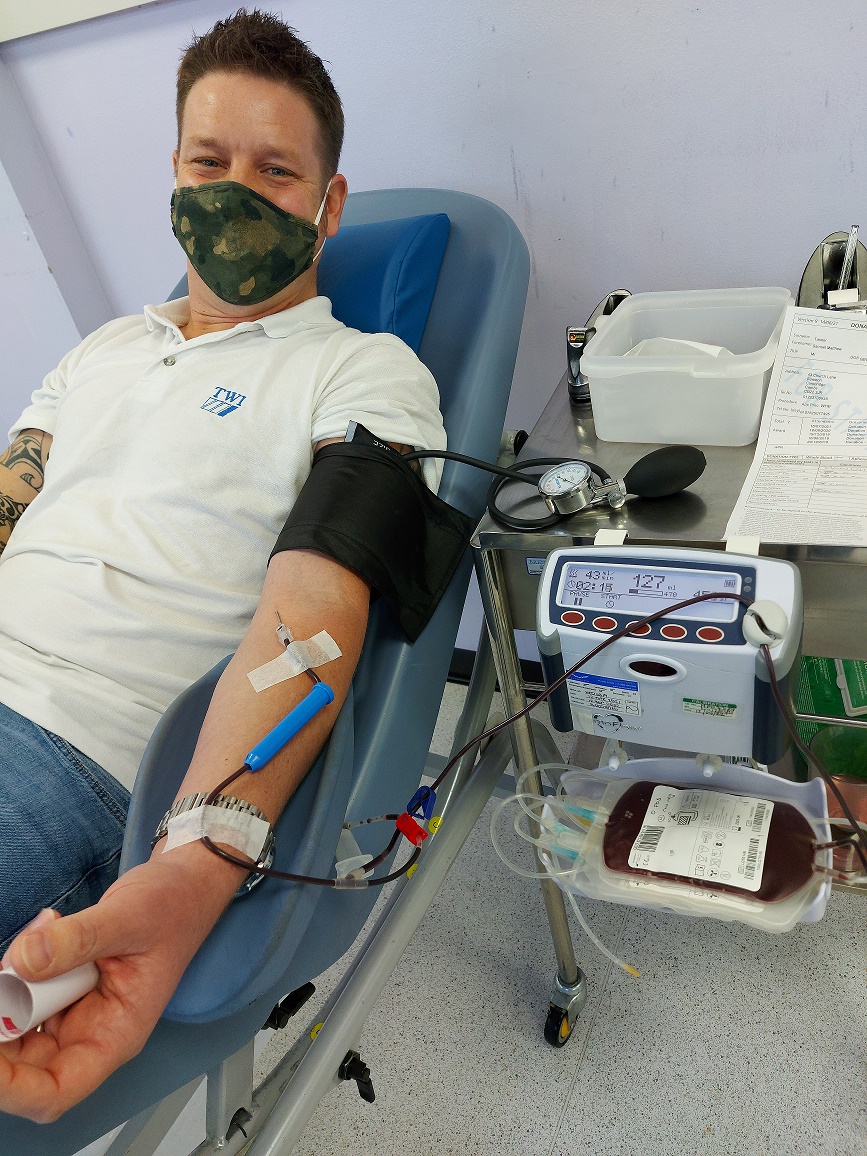 "And in the grand scheme of things, your split-second of discomfort in your otherwise normal day could mean the difference between life and death for someone else on what could be the hardest day of their lives. So, it's important not to lose perspective. And if that wasn't enough, you get your choice of flavour of Club biscuit afterwards too, so what's not to like?

"To those who are hesitant to donate I would say don't wait, just do it. For the tiny amount of time it takes out of your life, you could be making a huge difference to someone else's. And whilst nobody does it for their own ego, I'd be lying if I said it doesn't feel incredible and it gives you an enormous sense of well-being when you've done it. Especially when you get that text telling you where your donation has been used."

Sam adds, "For how long it takes, and the potentially huge difference it can make to the lives of others, I plan to continue donating for as long as they'll let me, and to encourage anyone who can to do the same. Your donation can save up to three lives."