Two-and-a-half-year-old James has a rare heart and blood condition. His mother, Lizzie, explains how donated blood is keeping her little boy alive. 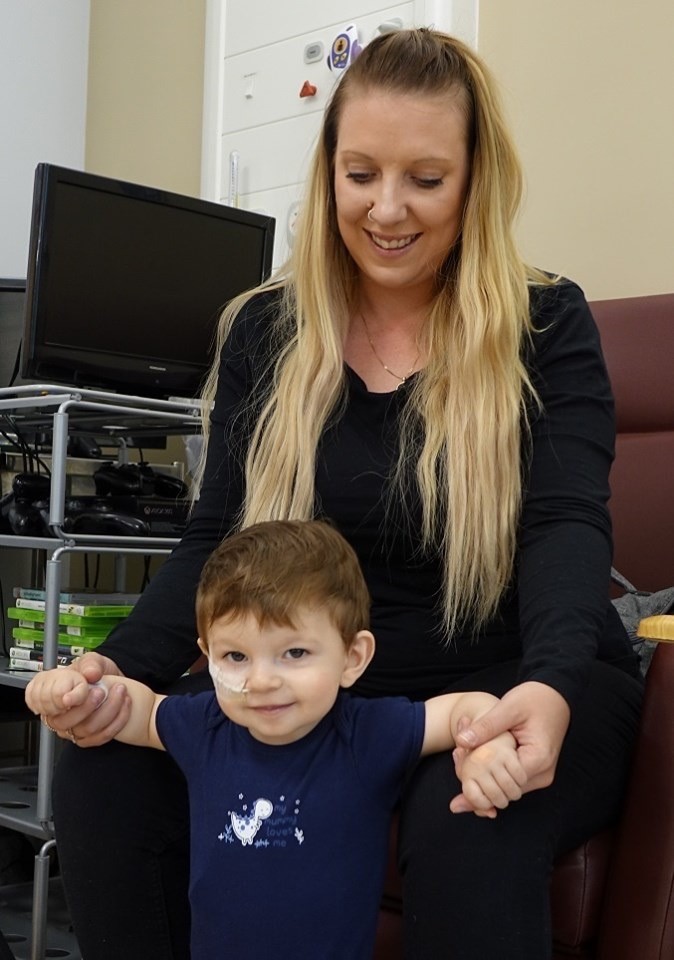 "At my 28-week scan we were advised that James would need surgery as soon as he was born as his heart didn’t develop properly, “said Lizzie. “He was diagnosed with congenital heart disease. It is where the main artery has a narrowing, which means that less blood can flow through it. He also has dextrocardia: his heart is on the opposite side, the right-hand side. The surgery was to rectify this and insert an artificial aortic arch to help his heart function properly.

(Picture: James with his mum Lizzie)

"He has had a two further, minor, heart surgeries to expand the pulmonary arch band inserted during the initial surgery. He will eventually require more open-heart surgery to remove the band and later on in life he will most like need a heart transplant."

As if this were not enough trauma, a few weeks after his first surgery, back in 2018, James started to look very poorly and was not tolerating any milk.

Lizzie said, "As a mother, you know when there is something wrong with your child and I knew straight away. He was really pale, and you could see his veins – he was almost see- through.

"At first, the doctors thought it was a chest infection or bronchiolitis, but little did we know there was an underlying genetic cause. Eventually, we were referred to a haematologist and James had a bone marrow aspiration, a procedure which is used to examine blood disorders."

James was diagnosed with Diamond Blackfan Anaemia (DBA), a rare condition and one that might have caused his heart defect. His bone marrow does not make enough red blood cells and he needs regular blood transfusions.

I’d never thought about blood before, but my son would not be here without the people who donate blood.

Said Lizzie, "He initially received O negative blood, which is often given to vulnerable new-born babies. Now he regularly receives A positive blood, which is his own blood group. James has a red-cell exchange every three weeks at Birmingham’s Children Hospital – all his blood is replaced with donated blood.

"The exchange transfusions are saving his life. I can normally tell when James is due a transfusion as he begins to lose his appetite, his skin goes very pale, he tends to bruise easily, and he generally becomes very lethargic and tired. If he didn’t get blood, he would die. I’d never thought about blood before, but my son would not be here without the people who donate blood. He would have died a long time ago.

"Once he has had his transfusions, his appetite comes back and he’ll eat normally. He is very energetic and runs around. James loves reading books and watching his favourite programme, which is currently Julia Donaldson’s ‘Zog’. He also likes cars and trains. He loves playing with his big brother, Josh, and playing hide and seek. He also loves going out for walks to the park, playing on the slide and jumping in muddy puddles."

Lizzie has now become a donor herself. "I gave blood for the first time in January 2020, despite having a phobia of needles. It honestly wasn’t as bad as I thought – in fact, I didn’t feel anything. Due to the pandemic, I’ve been unable to donate because James is high risk but hopefully in the future, I will be able to donate again.

"My message to all blood donors is, if you are lucky enough to be able to donate, please do! A moment of your personal time can save the life of someone who really needs blood."