New hope for patients with COVID-19

Catherine Briggs, 46, a GP from Stockport, developed COVID-19 in mid-March and had five days of moderate flu symptoms, followed by a day of feeling better, then several more days of high temperatures and shortness of breath.

She said, "I feel relief to have recovered without a hospital admission and to be nearly back to normal now. But this is then mixed with a sense of sadness for those - including colleagues - who have lost their lives.”

After recovering, Catherine volunteered to help with The Nightingale Hospital in Manchester. "I was then contacted by NHS Blood and Transplant to ask if I could donate plasma. I felt really honoured to be able to have a chance to give something back and turn a pretty nasty two weeks into something positive.”

"It was a really lovely experience to donate. I was telephoned the day before the appointment so that one of the team could talk me through what to expect and also give me information to help me understand and consent to the procedure.

"On the day, I arrived 15 minutes before the appointment and had some checks done, including one for anaemia. The nurse then checked my veins to see if they were big enough to donate. I was looked after by a very nice nurse. She put a needle into a vein in my arm - which didn't hurt - and I was then connected to the machine for about an hour.”

"I watched as my blood was separated and plasma was collected in a bag. The machine is very clever and gives back the red blood cells to you. At the end of the procedure, I felt fine with no side effects. Just went home and had my tea and followed the advice with a very lazy evening. 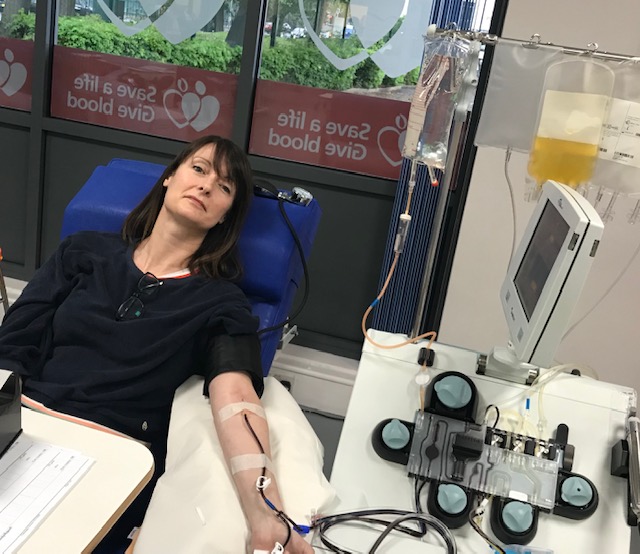 Stephen Franklin, 54, from Hall Green in Birmingham, donated for the first time on April 30 at Birmingham Donor Centre and is the first person in the UK to donate COVID-19 convalescent plasma a record number of seven times.

Stephen is a former army helicopter co-pilot and was a firefighter for 28 years. He has been working as a teaching assistant in a school for pupils with special educational needs for the last three years.

The dad of two became ill on March 26, while working in the school as a volunteer to care for the children of key workers. Stephen said, “It came on in the blink of an eye. I felt really weird – lightheaded and my lips started tingling – then I started to cough. I went home straight away, and I was ill for 10 days. I didn’t go to hospital although my partner wanted to call an ambulance.”

“I had a cough and my temperature almost hit 40C. I had a weird thing where my skin became hypersensitive. It was like I was sun burned – I couldn’t put clothes on because it hurt.”

Stephen eventually recovered and then saw online that NHS Blood and Transplant needed plasma donors who have recovered from COVID-19, so he put forward his details on the website.

“I wanted to do something to help people and it’s nice just to be able to give something back. Donating is straightforward, no problem.”

Stephen has previously donated plasma in the past but stopped and was just donating whole blood, so it’s safe to say he was used to the process. He says the staff were fantastic and made him feel really comfortable.

I hope that my donations are able to make somebody better. It gives you a warm feeling to think you are helping someone. I am surprised to find out I am the first person to donate seven times. It’s a nice feeling. I would say to anyone else, please do it – it’s a great thing to do.

NHS Blood and Transplant has a team of doctors and nurses working behind the scenes to ensure the safety of our blood, platelet and plasma donors and donations.

Here they answer your questions on convalescent plasma:

What is convalescent plasma?

How soon after recovering from COVID-19 can I donate convalescent plasma?

It is important that potential donors have fully recovered from COVID-19, and that their body has had time to develop a good antibody response. You should wait until at least 28 days from full recovery and resolution of symptoms. However, some individuals may have a cough or reduced sense of smell or taste for some weeks after resolution of their infection, but they can be considered as recovered for the purposes of donation, providing they are generally well and have no other respiratory symptoms or ongoing fever.

I believe I had COVID-19 but I did not get tested. Can I still donate convalescent plasma?

Yes, you may be able to donate, if you have the high antibody levels needed. These may be present even if you have only had symptoms of the illness.

How is convalescent plasma collected?

If you've had COVID-19, you may be able to donate plasma