In 2018, we shared a story by the journalist and best-selling author Caitlin Moran about donating blood for the first time in almost 20 years.

The scene she painted – one of “hot dust, floor polish and tea” and “love for someone you’ve never met” – resonated with many donors.

This is Eileen Noblet, whose nephew Mark inspires her to carry on giving blood.

I was donating at the Lancaster Donor Centre and telling the staff there all about Mark and Matilda.

“You should share their story,” the donor carers told me.

It’s still difficult to think about where that story starts. My nephew, Mark, went through six different chemotherapy regimens over three years, culminating in radiotherapy and then a dual stem cell treatment. It was a bleak and painful time for him and it was incredibly hard to watch him go through that. 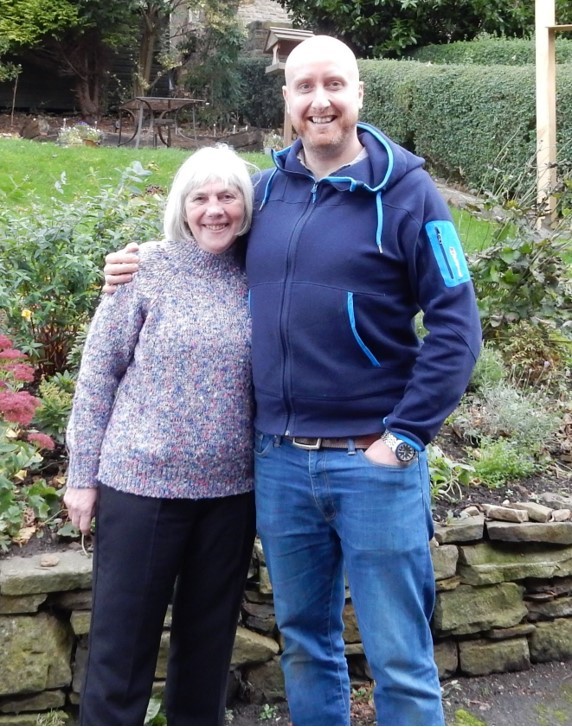 Somewhere along the line, though, I realised the truth and by the early 1980s I had become a blood donor myself. I was a mum of three young children at the time, but it was never inconvenient: the mobile blood transfusion unit used to come to a very old and draughty church hall near me and I gave as often as I could.

Then, after a few years, I ended up working in Lancaster and started donating at the donor centre at the Royal Lancaster Infirmary. The staff there have always been brilliant and over the years we have come to know each other well.

Many times, as I lay on the bed, I thought of my dad. His loss was so sudden. Years later, Mark’s treatment was so different. It was long and drawn out. He gained as much strength and fitness as he could in between treatments and tried to live his life as well as possible, whenever he was able.

Now, when I donate, it is often Mark who I think of

He relied so much on the support of his family and friends, a phenomenal medical team, and – most important of all – his wife, Alison, who was with him every step of the way. “Time and time again,” he always says, “she picked me up off the floor. She’s a remarkable person.”

But it was also anonymous blood donors that kept him going. Over the course of his treatment, he received over 50 transfusions of blood products, from red cells to platelets. He owes his life to the selflessness of blood donors.

Now, when I donate, it is often Mark who I think of.

My daughter comes to mind, too. It was she who persuaded me to go to the presentation and meal I was invited to after making 100 donations. In 2004, she had sepsis and was in intensive care. Her organs were failing, and she wasn’t expected to survive. Again, it was the generosity of blood and platelet donors that came to her aid. I thought she wanted to attend the ceremony to personally thank those donors, but I’m sure it also had plenty to do with her favourite dessert being on the menu!

I love the fact that now we are told where our blood has been sent. My blood has certainly been travelling further than me, especially during the pandemic, but it hits home how vital every single donation is.

In the last four years, two of my friends have died from leukaemia. Both were young men in their forties; both had children. Although their lives could not be saved, the transfusions of blood products helped to give them a bit more time to spend with their families.

I feel fortunate to have been able to donate for so long and plan to continue for as long as possible, though, at the age of 72 and after 116 donations, time is realistically not on my side, I hope that by sharing this story, more people will be encouraged to become donors.

Mark is seven years post-transplant and has been cancer-free for six years now. He even met his stem cell donor, Guy. They met in a pub in Birmingham and shared a pint. It turns out they also shared uncannily similar world views and senses of humour, both love good beer and Scotland. They have since become good friends and meet up whenever time and life permit.

But the best part of Mark’s story? Matilda. Matilda was born in November 2021 and Mark and Alison chose the name hoping their daughter would be strong, determined and thoughtful, like her namesake Roald Dahl character. Matilda means ‘strength’.

Her middle names are Florence, an homage to all the nurses who give so much of themselves and hold our hands when we don’t feel like carrying on, and Gaia.

That name is a fitting tribute to Guy, Mark’s life-saver.

You can register for stem cell donation at bbmr.co.uk/joining-the-register.