Phillip Stout has been a donor for 50 years and has every intention of continuing. He looks back on the early days and how donating has changed over the years. 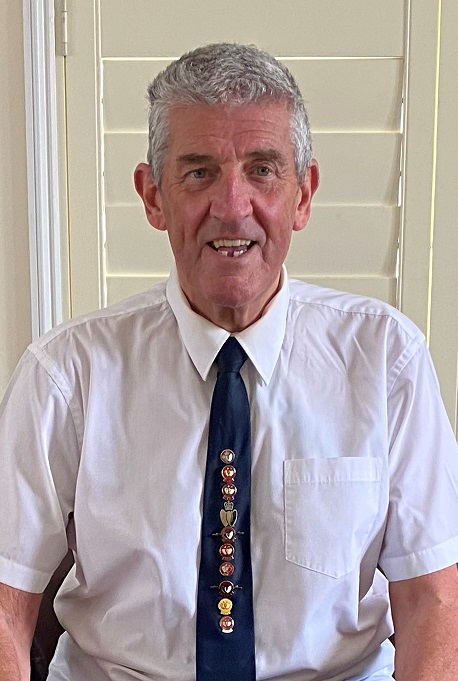 On 10th February 1971, I joined the army and left my native Yorkshire on a train heading for the REME Depot Arborfield in Berkshire to start my basic training. In April I moved to the School of Electronic Engineering (SEE) REME to start my RADAR training.

(Picture: Phil has received many badges during 50 years of donating)

On 29th July, a mobile blood donor unit arrived at the SEE asking for soldiers to donate a pint of blood. That was the very start of my blood donating experience, which had now lasted for over 50 years and I will be continuing for as long as I’m allowed.

On leaving the army, I made 22 more whole blood donations before I started studying for my PhD at University of Manchester Institute of Science and Technology (UMIST) in 1986.

To date I have made over 1540 donations and I’m hoping to get to the 1600 mark next year. Ultimately, I would love to achieve 2000 donations.

One day I called the blood donor centre in Manchester to book to donate whole blood. The staff asked me if I would consider plasma donations at the local plasma centre. So I agreed, got tested and I donated plasma for the very first time on the 1st April 1987.

This allowed me to donate every other week, which meant that I could help even more people, as whole blood donations were limited to only two donations per year. I remained a donor there until 1988, before I returned to my home in Surrey.

From 1988, I continued to donate at different centres, and I’ve been donating at the Tooting Donor Centre since 2001.

Things have changed in 34 years that I have been donating plasma and platelets. During my first plasma donations, the procedure lasted around 30 minutes, which meant that I could donate during my lunch break and then get back to work. Then, with advancements in the technology used for donating, the time involved in donating has increased for anything up to 90 minutes, a fact that has not worried me as it’s the act of donating rather than the length of time for the donation that is far more important to me. I’ve experienced two arms and single arm procedures for collecting plasma and platelets. Another change is who inserts the needle. Originally, it was the nursing staff and the donor carer sat with you during the procedure. Nowadays, a donor carer inserts the needle and not the nursing staff.

To date I have made over 1540 donations and I’m hoping to get to the 1600 mark next year. Ultimately, I would love to achieve 2000 donations.

My inspiration for donating has always been the fact that I am able to provide help to someone who needs this vital service. I just want to give someone else the chance to have a more satisfactory life expectancy without the pain and anguish due to poor health.

For those who are hesitant about donating, I would first say how rewarding the feeling is of knowing your donation benefits someone. Also, the donating experience is very easy and, in most cases, painless. I would love to see more hesitant people donating whole blood, plasma and platelets.

The one actual thing that has recently made a big difference to me and enhanced my aim to continue to donate, is the fact that we are now told where the donations are sent.

Finally, I wish to say what a wonderful experience it’s been over the 50 years I’ve been donating and what a wonderful job NHS Blood and Transplant do. And what great staff you have who give us donors a wonderful feeling of care and make us feel part of a dedicated family who are trying to do something good for all those less fortunate people we support. Please continue the great work you do and stay safe during these trying times.