Gillian is close to reaching 100 donations. Her husband received more than 200 transfusions after he developed Myelodysplastic Syndrome, a rare blood cancer. 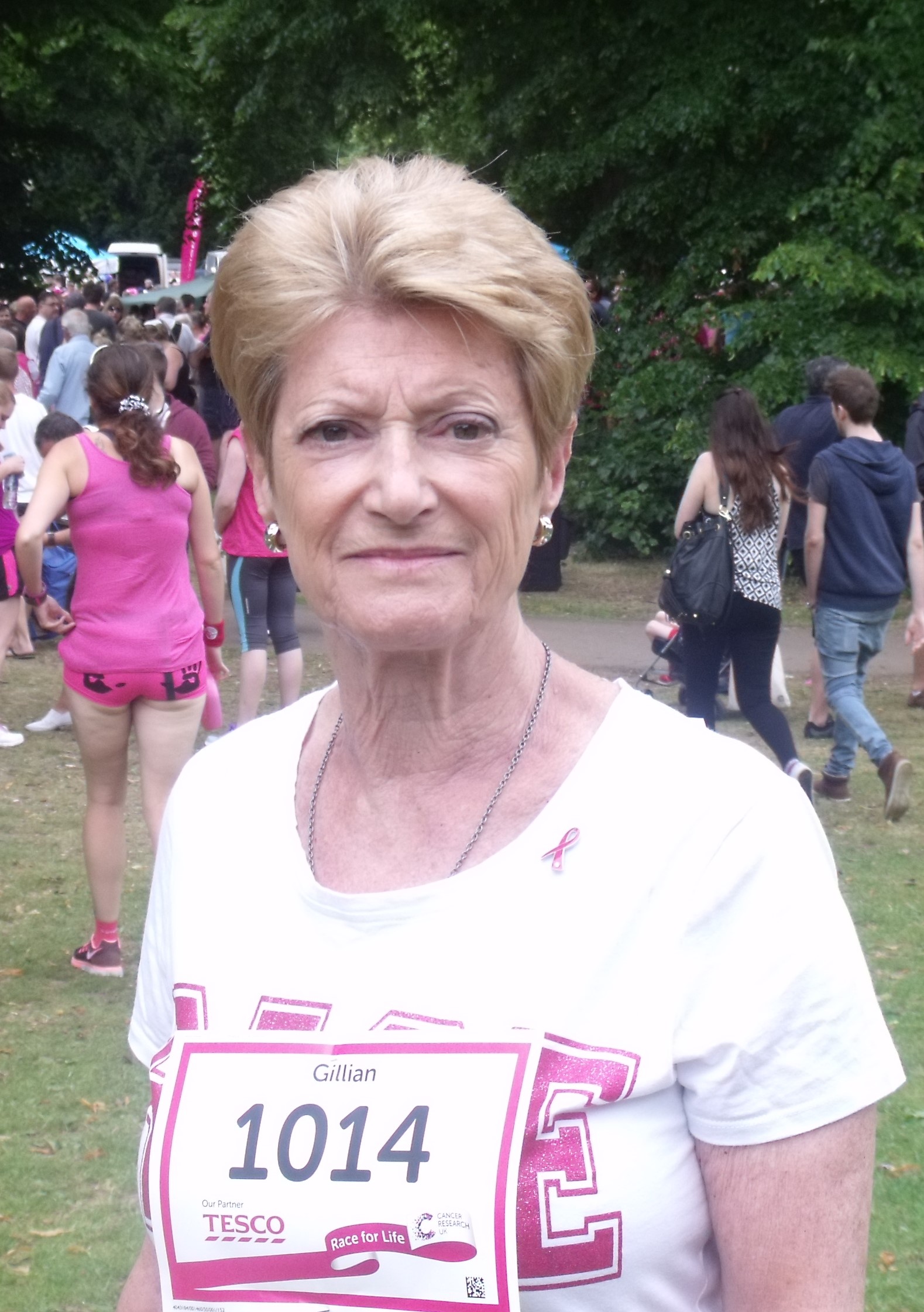 I first gave blood at St George’s Hospital, Tooting and continued there for around 18 years. I do remember being quite nervous – not about actually giving blood but being in the right place at the right time. I wasn’t a very confident person then.

(Picture: Gillian at a Race For Life event)

My memories of giving blood in those days were of the long waits, the rows of beds in a cold hall, and how long it all took. There was no necessity to drink (what seems to me now) gallons of water. You just sat patiently and waited your turn and there was no questionnaire to complete either. Tea, coffee and a biscuit were offered. Of course, the procedures have changed a lot, not least the safety aspects and form-signing to keep everyone safe, but also the whole procedure is so much quicker. The beds have been replaced by state-of-the-art chairs.

Since those far off days, I have donated in London, Surrey, Suffolk and now Kent – wherever I lived.

Even after all this time, and even though I have donated every time it was permissible during the past 57 years, I have still only donated 95 times due to pregnancy, a serious lung infection when in my 20s, and numerous periods after holidaying in countries deemed to be unsafe.

My 75th donation certificate was presented at a special lunch held at Portman Road Football Stadium in Ipswich. My most recent donation was in October – it was my 98th and I am desperate to reach the 100th. 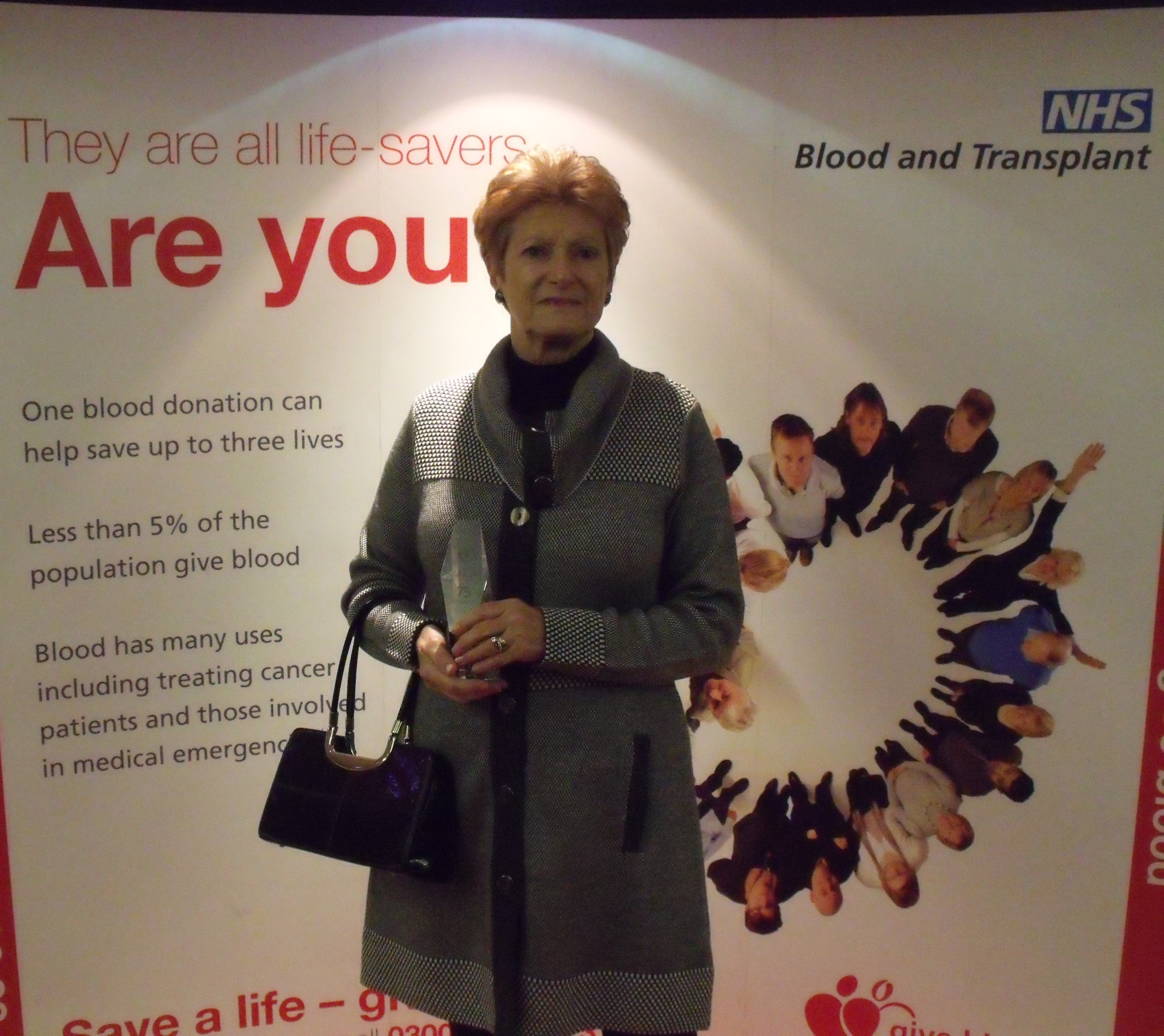 Sadly, my husband was diagnosed with Myelodysplastic Syndrome (a rare and complex blood cancer) back in 2017. He became dependent on blood transfusions as his haemoglobin levels often dropped to around 60 (for Men normal haemoglobin levels are 130-180 g/l). Following sepsis and chronic heart failure in 2018, (doctors decided) that no further treatment other than blood transfusions was available to him so, for the past two years until his death, he received weekly transfusions to keep him alive.

My husband received over 200 transfusions in a two-year period. This is how much your blood is needed and I would like to thank all donors for helping to keep David alive. I donated just two weeks after he passed away and it was the hardest thing for me to do, having been present at every transfusion he received. The chair, the needles, the tubes, the bag of blood, were all very similar but, hopefully, my donation went towards helping to save a life.

I don’t really know what kept me motivated for some 50 years. I always worked full-time so felt that offering my blood was the least I could do for my fellow man.  I will never give up until advised to. Like a lot of people, I thought donated blood was just for serious injury and operations. Donations gave my husband another two years of life. Perhaps this fact could be advertised to make people more aware of how life-changing and life-giving a blood donation can be.

There is no need to be apprehensive about donating. It is quick and painless (in my years of experience). The staff keep you fully informed, they are caring and efficient. Nowadays, the actual donation takes only about ten minutes.