Brian Coleman has donated 136 units of blood over the years and here he tells us why he started to donated in the first place. 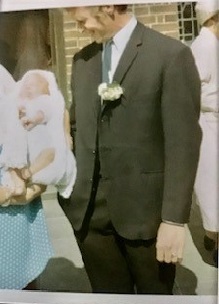 I started giving blood on 16th September 1970 and I’m still going strong. To date, I have donated 136 units.

My son was born on 27th March 1970 at Buckingham Road Brighton, one of twins. Unfortunately, his sister only survived for two days. They were 12 weeks premature, Kevin weighed in at 2lb 12ozs, Karen 2lbs 14ozs.

(Picture: Brian with his son Kevin)

Kevin was moved to the wonderful children’s Royal Alexandra Hospital in Brighton alongside numerous other children with all sorts of problems. On our visits it was heart breaking to see these poor kids and their various problems.

My wife and I visited every day, looking and breathing in unison for him... I will never forget his first grip of my finger, what a fighter!

Kevin got pneumonia, I think his lungs were not properly developed at birth, and he spent the next 12 weeks in an incubator. My wife and I visited every day, looking and breathing in unison for him. We could not touch him until that wonderful day we were told he is leaving his life-saving machine. I will never forget his first grip of my finger, what a fighter!

The NHS staff are marvellous these days and they were exactly the same back then - dedicated, caring, and very knowledgeable hard workers. 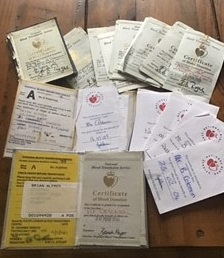 Kevin is now 50 years old with a lad of his own, and he is a postman in Hassocks. You would never guess his fragile start to life to look at him now.

So that is how I started giving blood 50 years ago, just a small repayment to the wonderful people who were treating all the children we used to see.

I was told two years ago my blood subtype is Ro so can be used to treat people with sickle cell disease. I am now a mere 72 years young and striving for 150 pints!