Sarah Marshall was making her hundredth donation when she found out something interesting about her platelet type: it was an exact match for someone else’s.

“The nurse who was attending to me mentioned that he had seen something on my file that meant I may be an exact match for someone, somewhere, and my donations could be going to one specific patient.

“Naturally we have no idea where that person might be, but, in the coming months when I get the text message telling me where my donation has gone, if it's regularly the same hospital then that will give me a clue.”

But although she’s now a centurion donor, a veteran of both blood and platelets, it nearly didn’t happen. Sarah was due to make her first donation as a student in Liverpool, just before the turn of the millennium, but seeing all the medical equipment made her turn around as soon as she entered the room.

“The moment I got through the hall doors my stomach flipped and I just couldn’t do it!” she says. “But later that evening – as soon as it was too late to change my mind, in other words – I regretted chickening out, and when they returned a few months later, I said to myself, ‘Right, Sarah, this time you are going to do it.’ Bottling out a second time would have been just terrible!”

But something else inspired the young Sarah Marshall to put her fears behind her and start giving blood.

“About six or seven months before my first donation, I became aware that someone who meant a lot to me then had, a few years previously, gone through a terrible time with substance abuse problems.

“At one point they had overdosed and in fact been technically dead for two minutes. The thought that they could so easily have not been around for me to come to know them was a bombshell moment, because if I had been around, I'd have done anything I could for them.

“The thought that there is nothing we can do for someone who means a lot to us is a hard thing to bear, and those emotions worked themselves out in an unusual but very pleasant way: I might not have been able to do anything for them, but I could put back in a way by doing something for someone else, and that someone else doubtless means just as much to another person somewhere as the person I knew did to me.”

“It sounds corny to say it wasn't so much a choice as a real driving urge. Perhaps chalk it up to youthful idealism but I threw myself into all kinds of things – sponsored events for a drug rehab charity, campaigning with Amnesty International and Greenpeace – before the notion of blood donation came to me.”

Corny or not, Sarah continued to find herself in the donor chair over the next 14 years, putting back by giving blood and saving countless lives in the process, before switching to donating platelets.

At a donation appointment in 2013, she saw banners asking for A negative donors like her to become platelet donors, so she gave a platelet sample with her next donation. Around two weeks later she was told she could start giving platelets and Sarah booked in for her first platelet session. 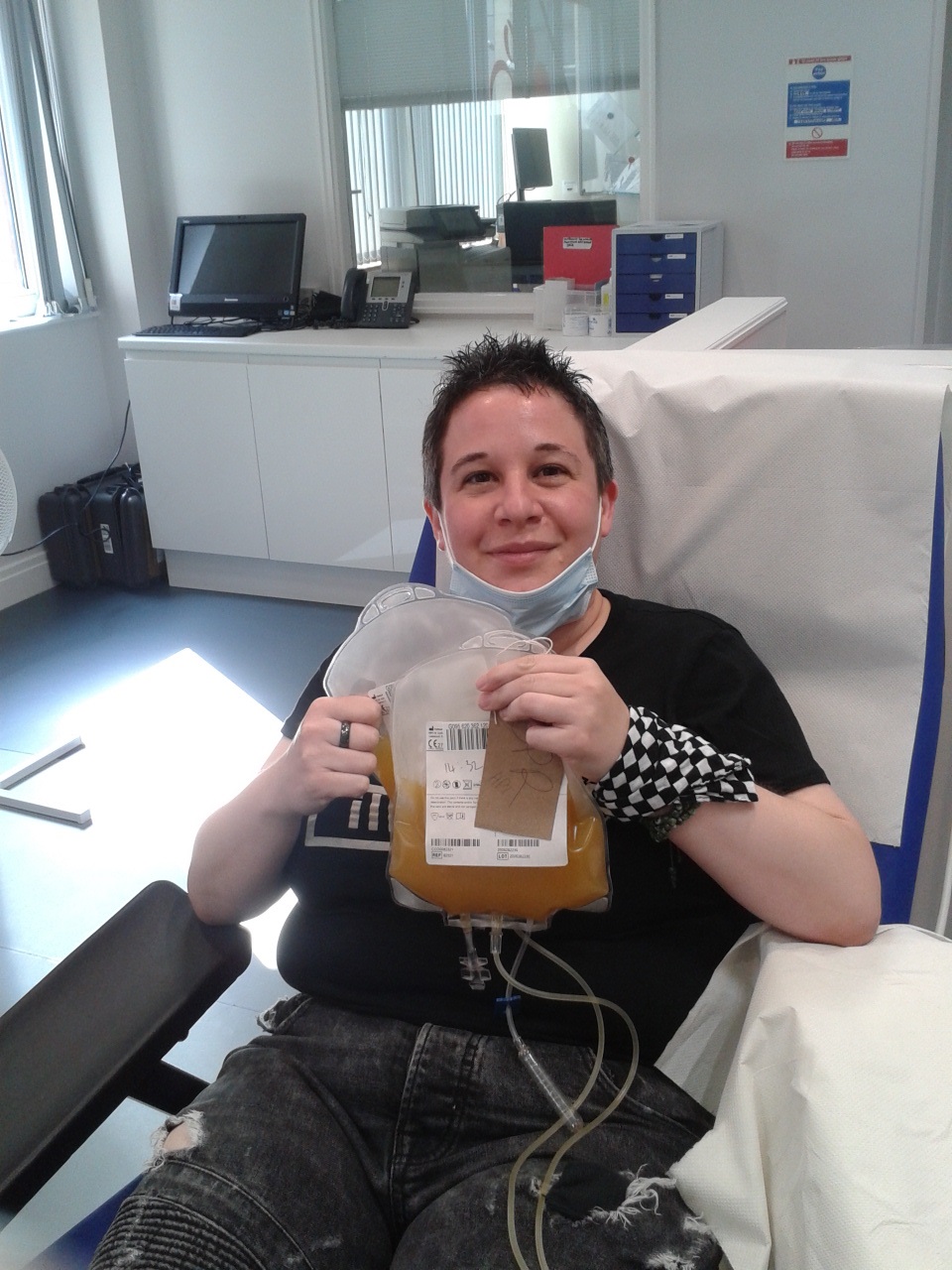 “When I found out I was able to donate platelets, I made an update about it on Facebook and an old schoolmate of mine – a consultant paediatrician at Great Ormond Street Hospital – posted a very touching response I've now lost but have always remembered the gist of: ‘As someone whose job it is to prescribe platelets, I wish I could show you some of the poorly children who come in to us grey but turn pink before my eyes.’

“My donations have gone literally all over the country. I've received texts saying they’ve gone to hospitals up the road in Bury, in Stoke-on-Trent, several in London, Leeds twice, Leicester, Coventry, Newcastle and Alder Hey Children's Hospital in Liverpool.

“It all feels a little bit like collecting football stickers as a child at times – I'm holding out for St Peters', Chertsey (where I was born), King's Mill (for some years as a child my nearest hospital), and North Manchester General (my "local" now).

“But recently, a text message came through to tell me my donation had gone to Great Ormond Street.

“I realise that there are an awful lot of doctors there, so the chances are long that my pack went to one of my schoolmate’s patients, but it doesn't matter to me. But don't you think there's just something very nifty about two schoolmates, one of them gives platelets and then they are sent to a hospital where the other prescribes them? How many house points would that have got us for good team work back in the day?”

Having made donations in four different decades and showing little sign of stopping, Sarah is clearly committed. What’s more, the news that her platelets may just be keeping one particular patient healthy is fuelling her desire to carry on donating.

“It's meant that I'm going to make an extra effort to be healthy enough to donate every two weeks instead of four going forward.

“I'm thinking of keeping that person topped up.”