Eastenders and Dr Who star Joivan Wade gave blood and found out that his blood makes him a very valuable donor. 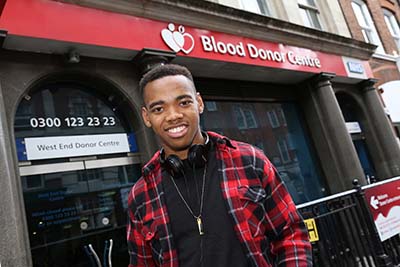 Extended tests revealed the 23-year-old, who currently stars at Jordan Johnson on Eastenders, has a combination of blood groups that make his blood excellent for transfusing trauma victims and people with rare blood disorders.

Joivan felt a responsibility to donate for the first time after his work with the charity ACLT made him aware of the need for more black donors.

“Because of all the negative antigens he carries, he can be used for difficult patients who have produced antibodies to transfusions they have had in the past. He would be ideal to be used for a patient who is multiply transfused such as a patient with the genetic blood disorder sickle cell. Sickle cell patients can sometimes have full exchanges of 8-10 units of blood.

“The fact Joivan is O negative, K negative also means his donations can be used in a dire emergency where there is no time to get a patient's blood type and transfusion needs to happen immediately.”

Joivan, who played Rigsy in Series 8 and Series 9 of Doctor Who, and appeared in the BBC comedy Big School, and is one-third of the hugely popular online comedy Mandem on the Wall.

He also co-created the Facebook and You Tube hit Wall Of Comedy, which has more than two million likes.

Joivan said: “We only have a small percentage of blood donors who are black.

“And I put myself in the position of ‘If I needed blood, what would I want?’ I would want people to come forward and donate blood for me.

“I felt amazing about donating for the first time. I felt a bit apprehensive beforehand, as you would, but it was so simple and I genuinely feel a sense of achievement.

“To know my blood is specifically useful for patients who are multiply transfused such as with sickle diseased patients is great. I know a of black people suffer from sickle cell, and by giving my blood I’m now able to help and impact our community. The reward is saving someone’s life, and that’s priceless!”

Around 3.5% of the population in England is black African or black Caribbean, but last year only 0.64% of donors were from black communities.

People from a similar ethnic background are more likely to have more closely matched blood, which patients need for the best possible outcome.

“One day it could be you, or someone you love, in need of donated blood.”

You can watch a video of Joivan donating here https://www.youtube.com/watch?v=HlHm_hutpNY&feature=youtu.be

Female whole blood donors can give blood every 16 weeks, while male blood donors must wait 12 weeks between donations. Platelets can be donated every 2 weeks.