How students answered the call for more donors

Nottingham Trent University (NTU) students set themselves a big challenge. It involved pints. But not the kind you pour down your throat (hardly newsworthy!) but the kind that saves lives.

The ‘1,000 Pint Challenge’ was taken on by students after an appeal was made for more blood donors in Nottingham. It’s been a huge success: in just 18 months, hundreds of NTU students answered the call and their donations have now reached the magic 1000-pint mark. 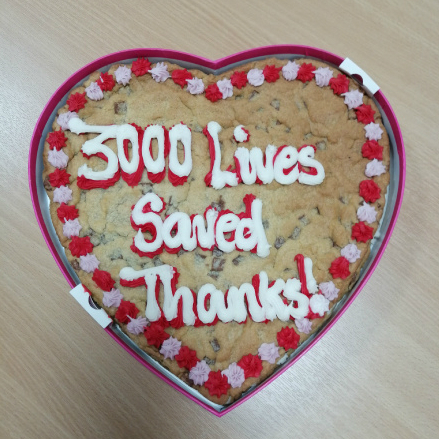 “So we are very grateful to the staff and students at Nottingham Trent University for donating blood and helping us exceed our target and reach 1,009 donations.

“The donor centre in Nottingham is located right in the centre of the city, so it’s ideally situated for university students and city centre workers. We have free Wi-Fi, bus, tram and train stops are close by, and there’s a bright, modern and relaxed environment, plus there’s evening and weekend appointments here too, so it’s a great place for people to make their first donation.”

Paul Dodsley, student health development officer says, “The 1000 Pint Challenge was developed from an idea an academic had at NTU. We are extremely proud to be the first university in the UK to achieve this. Our goal was to instil the importance of donating blood regularly to all our colleagues and students.

“It’s amazing so many people have supported the challenge and helped to save many lives in the process, and we hope to continue donating many more thousands of pints as a university.”

School students join in too

Just outside the city, in nearby Southwell, the students at Minster School have embarked on a similar bid to save lives.

At the request of head girl Selina Rees, our staff visited the Minster sixth form in February to talk about the importance of blood donation, and they were impressed with the enthusiastic response they received, with many pupils registering as donors on the spot.

Staff and students from the school attended a donation session the following month at the nearby Southwell Leisure Centre.

“As someone who can donate, I feel a moral obligation to do so. If a friend or relative needed blood and I could give it to them, then obviously I would, so why not for someone else’s friend or relative?” says Selina.

“Giving blood for the first time last November made me realise how quick and easy it is to save lives and I wanted to encourage other students to do the same. I think it is really important to promote blood donation to young people because they can become lifelong donors and they will inspire others to donate too.”

Deputy Head Rhod Price, who has been giving blood for more than two decades, inspired by his mother’s 50-year stint as a donor, says, “I think that if people get the habit early on they are likely to go on giving blood and so saving lives.

“Peer pressure is such a powerful force and there’s no reason it shouldn’t be a force for good. Young people seeing their peers participating in pro-social behaviours such as blood donation are likely to join in and so the next generation of donors is established.

“One of the values at the heart of our school ethos is Service - and all the students who donate, but particularly Selina with her leadership of this - are demonstrating a real service to others. Well done to them all!”