NHS Blood and Transplant is now leading a major new programme, on behalf of the Government, to collect convalescent plasma from people who have recovered from COVID-19

NHS Blood and Transplant is now leading a major new programme, on behalf of the Government, to collect convalescent plasma from people who have recovered from COVID-19 to support a national clinical trial. The Department of Health and Social Care has today (Saturday, April 25th) announced the programme.

We are working in collaboration with other NHS partners including the UK’s other national blood services, Public Health England, and NHS Digital.

The trial will investigate whether plasma transfusions could improve a COVID-19 patient’s speed of recovery and chances of survival. The first donations have now been collected and the first transfusions will follow later this month. The transfusions will be done through the existing REMAP-CAP trial and further trial options are being explored.

In parallel to the trial, we are rapidly building up capacity to collect plasma so that it can deliver at a large scale, if transfusions are shown to help patients.

The NHSBT-led consortium will build up capacity in April and May so that it could collect up to 10,000 units a week, with the final figure dependant on the trial results and hospital demand. To scale up collection, we have started using plasmapheresis, recruited more than 150 new staff, prioritised plasma donation at donor centres, and will use new venues for plasma-only donation sessions.

What is convalescent plasma?

Convalescent plasma is plasma from people who have recovered from an infection. Recovered patients’ plasma may contain antibodies that their immune systems have produced in fighting the virus. That plasma can be transfused to patients whose immune systems are struggling to develop their own antibodies. The trials will investigate whether transfusions may improve a patient’s speed of recovery and chances of survival. Plasma can also be collected and frozen ahead of any second wave of COVID-19.

Who can donate plasma?

We are contacting potential convalescent plasma donors directly, using recovered patient data supplied through the wider NHS. It is important that potential donors have recovered and their body has had time to develop a good antibody response. For these reasons, we are currently collecting plasma no sooner than 28 days after recovery. This also means that until recently few people were eligible to donate.

Dr Gail Miflin, Chief Medical Officer, NHS Blood and Transplant, said: “As well as continuing to collect enough blood throughout this outbreak, we are also heavily involved in the national research response including major trials of this potential treatment.

“We are also rapidly building our capability to collect plasma so that we can quickly move into supplying hospitals at scale, should the trial demonstrate patient benefit. To deliver this ambitious programme, we will need collaboration from across the health sector.”

If people have a confirmed positive test result and they are willing to donate, they can also provide details through a form on the NHSBT website. We will be prioritising donors who are best placed to help so we there may be short delay in responding to some people.

One of the first plasmapheresis donors was Michael Squire, 30, of West London, who works for an auction house.

He said: “The donation could not have been simpler. The staff were lovely and they made it so easy. People were very welcoming and professional. 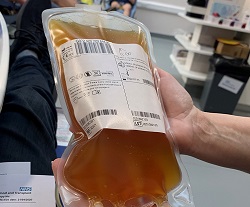 “I was there for about two hours though the donation was only just over 40 minutes. It was the most worthwhile couple of hours I have spent in a very long time. It makes a huge difference to think I could be helping people and that I am playing my part in the research.

“I would say to anyone else who has recovered, not to worry, it’s easy.

“I wasn’t that surprised when I got the call because I had heard this was being considered, and it was great to be able to get in and donate almost straight away.

“I started to feel unwell on February 29th and by the next day I had a mild fever. I was fortunate that I didn’t need to go into hospital and I was fully recovered two and half weeks later.”

Dr Rhys Clayton, a consultant anaesthetist at Manchester University NHS Foundation Trust, was also one of the first recovered people to donate into the programme. Since recovering he has gone back to work and cared for COVID-19 patients. 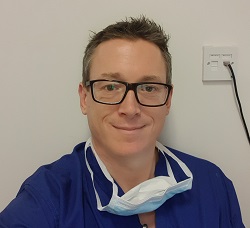 The 40-year-old from Chorlton in Greater Manchester, said:

“I was one of the early coronavirus cases. At five days I started to feel better, but as time went on I was getting blue lips and by day 12 I started feeling short of breath. I had to come into A&E.

“I donated after recovering and it was straightforwards. I am looking forward to seeing what happens next. It’s interesting to feel you are at the cutting edge of something to help. It felt nice to be giving something to help other people.”

Professor Dave Roberts, Associate Medical Director, NHS Blood and Transplant, and a Professor at the University of Oxford said:

"In previous flu and coronavirus epidemics, some reports suggested antibodies from donors who had recovered from the disease could be used to treat acutely ill patients.

“We are investigating whether this plasma can improve survival and reduce ventilation and intensive care unit stay in COVID-19 patients. This is an exciting development as there is no proven treatment for COVID-19.”

Dr Lise Estcourt, Director of NHSBT Clinical Trials Unit and a senior lecturer at the University of Oxford, said:

“We need to identify effective treatments for COVID-19. One possible treatment is giving patients in intensive care a transfusion of plasma - the liquid part of blood - that contains antibodies against COVID-19 from donors who have already recovered from the infection.

“This trial will assess whether these special plasma infusions can save lives and reduce the time people need to be on a ventilator. We are working with the other UK Blood Services to ensure that convalescent plasma is available for use in this trial and other clinical trials that are currently being set up.”

"This ground-breaking trial, conducted by NHSBT, will test whether convalescent plasma treatment can save lives and shorten intensive care unit stays. This could benefit patients and help protect the NHS. If the trial has positive results, subsequent studies could test if convalescent plasma can prevent the need for intensive care unit admission altogether, or increase immunity in the most vulnerable individuals in the community.”

More about the programme

Find out more about our work with COVID-19 research

Could you donate plasma?

How to get involved