Adijatu is supporting the Bonded By Blood: A Mother's Story campaign by sharing her and her daughter Adfreya's story. 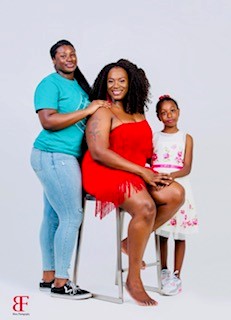 8-year-old Adfreya is very friendly, clever and articulate girl. She was diagnosed with sickle cell disorder at the age of six.

Adfreya has undergone red cell exchanges every three weeks since 2014. Blood transfusions are one way to prevent or relieve the symptoms of sickle cell.

A red cell exchange removes the person's sickle-shaped red cells and replaces them with normal red cells donated by blood donors. The remaining part of their blood, including white cells and plasma, is then returned to them, unchanged.

By replacing the sickle cells, the oxygen circulation around the body is improved and complications of sickle cell are reduced.

Without the regular transfusions, her condition could get worse over time and cause severe pain, known as a sickle cell crisis, which could lead to hospitalisation.

She is very understanding about her health condition and takes her treatment very well. She understands why she needs blood exchanges and is always willing to cooperate with medical staff, whenever we are in hospital.

Adfreya over the years has got to understand more, why all the interventions she receives are done. In her short life she has had three sickle cell crises which has resulted in her being admitted in hospital. Her crisis if not severe, are normally managed at home, with over-the-counter painkillers.